Dying Matters Awareness Week 2018 – What can you do? 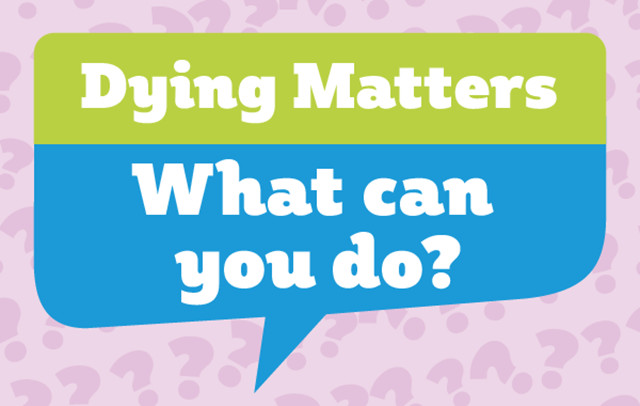 Blog image for Dying Matters Awareness Week 2018 – What can you do?

Since 2009, Dying Matters' mission has been to encourage British people to talk about death and dying, understanding this is something we all face throughout our lifetime. Part of Hospice UK, the charity is of the view that our unwillingness to speak about death has a detrimental impact on the level of support available to both patients and families, ultimately hampering our ability to make plans for end of life.

As a result, each year in May, Dying Matters hosts its awareness week to raise the importance of talking about death, dying and bereavement with our friends, family and loved ones and the 2018 awareness is taking place between the 14th and 20th May.

In 2016, research conducted by ComRes identified people are even less comfortable talking about death with their loved ones than they were discussing notoriously difficult subjects such as politics, religion and immigration. At the beginning of this year Golden Charter commissioned research into public attitudes towards funeral issues which identified we still have some way to go when it comes to talking about death and dying – almost 50% of those surveyed said they would like to talk to their loved ones but felt uncomfortable addressing the subject1.

So what can you do?

Inform your loved ones about what you want

We understand the conversation can be difficult but one of the easiest ways to start the conversation is to use humour or topics in the media as a starting point. Start off by telling your loved ones about what you don’t want, working up to what you do want.

Have your Will drafted

With a Will outlining how you want your assets to be shared, having one drafted can help to give you peace of mind as well as making things easier for your loved ones when the time comes. Recent research has shown that 59% of British adults do not have a Will however this is the first step in setting out your wishes for your funeral, and for after you have gone2.

Plan your funeral in advance

With the average cost of a funeral plan now sitting at £4,0783, purchasing a pre-paid funeral plan today can not only help save you money but can help relieve your family of worries and undue stress at an already difficult time. Find out more and compare the plans Golden Charter has to offer here.

For the first time since it began, based on the success of last year, Dying Matters has run with the same theme, what can you do, extending this out to what can you do in your community.

As many of us are aware, people can encounter bereavement at any point in their life and the campaign highlights the fact that many people in our life – work friends and colleagues as an example – may be going through stages of grief in silence. The campaign aims to encourage community groups, clubs, gym groups or even amongst a group of friends at the pub to talk about death and dying in a positive way.

Recent figures from Childhood Bereavement UK show up to 70% of primary schools have at least one recently bereaved pupil on their roll and roughly one child per class has dealt with the bereavement of a parent or sibling illustrating the important of discussing coping strategies and how best to approach children dealing with a loss. To help support, Dying Matters suggests reaching out to your local school to make them aware of local and national support available for children enabling them to filter the information down to those in need.

Advice for helping a grieving colleague includes welcoming them back into the workplace, expressing sympathy towards them and their family and if you are struggling of what to say, a simple ‘I’m not sure what to say but I would like you to know I’m thinking of you’ will suffice.

Hospices provide a vital service to patients and their families during a time of need and many are run solely on the help from volunteers and charitable donations. As such, volunteers are one of the most important parts of the team at local hospices and Dying Matters is encouraging people to get involved. Helping out can include as little as offering practical support and companionship and administrative help to working in wards day to day.

The 2017 Dying Matters Awareness Week was the most successful yet seeing hundreds of events held all over the country and there are already 200+ events registered this year so far. What can you do in the community to help? Let us know over on Facebook.