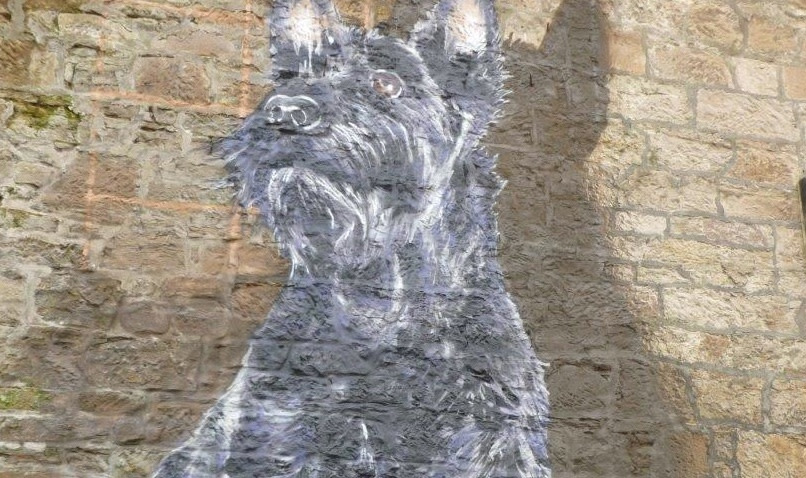 Driving home from work the other night, I passed a huge mural of a Scottie dog and it reminded me of one of the most heartwarming Scottish tales involving that particular breed.

Over 150 years ago in Edinburgh, there lived a man named John Gray and his dog, Bobby.

John, who was known as Auld Jock, was a night watchman for the Edinburgh City Police, and was virtually inseparable from Bobby, his little Skye Terrier.

On February 15th, 1858, Gray died of tuberculosis and was buried in Greyfriars Churchyard.

Bobby led his master's funeral procession to Greyfriar's Cemetery, and later, when he tried to stay at the graveside, he was sent away by the caretaker. But Bobby returned and refused to leave, despite less than great weather conditions.

The loyal canine spent the next fourteen years at the grave, leaving only for food. Although Bobby was well cared for by the people of Edinburgh, he still remained loyal to his master, and he continued to stay, faithfully guarding Auld Jock's grave for all those years, until he died on January 14th 1872, aged 16.

Also located in Greyfriars Kirkyard, Bobby now rests just 75 yards from his master's grave. He has a red granite headstone, which was unveiled by His Royal Highness, The Duke of Gloucester CCVO, in 1981.

The subject of not one but two movies, including a Walt Disney production no less, the story of Greyfriars Bobby has entertained people all over the world.

A pub even opened up in Edinburgh named "Bobby's Bar", featuring a statue of Bobby standing guard on the outside of the building attracting visitors from all over the world.

Just as the statue reads "Let his loyalty & devotion be a lesson to us all" ...