Behind the scenes of our new TV advert 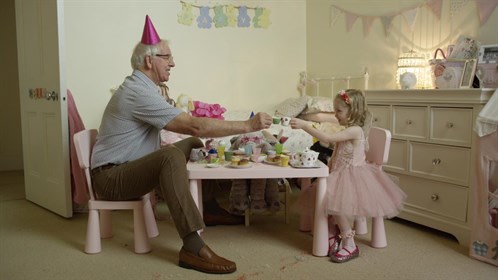 In August 2015, we began working on our latest TV advert, which aired on the 18th of January this year.

Our central theme was that a pre-paid funeral plan is, first and foremost, about doing something special for your family, and a simple way to help our loved ones at a time when they need it. We wanted to challenge the perception of taking out a funeral plan and show how it really is a special act to benefit those we leave behind.

In the advert, we wanted to show a few snapshots of the little day-to-day things we do for and with our families. The following are some behind-the-scenes stories from our advert.

The little boy's starfish costume was actually handmade from scratch by our talented art director. His cheery smile when he spots his family strongly resonated with the connections we have with our family members and the lengths we go to for the ones we love - including painstakingly sewing on sequins in the small hours!

Despite only meeting five minutes before shooting the scene, you wouldn't believe the amount of fun our grandpa and little child star Lacey had at their tea party. They played for hours with the teddies and tea set and during this time it was Lacey who cheekily came up with the idea to put the streamers behind grandpa's glasses. We felt this was a particularly touching scene as many of us are familiar with the silly little things we do for our children or grandchildren just because it makes them laugh.

7am on a wet Wednesday in Brighton doesn't sound like the most glamourous of locations, but we had to fight the elements. Our lovely couple braved the rain and gales to eat their ice creams while our production team did their utmost to stop their makeshift gazebo from blowing into the English Channel -- and thankfully they were successful.

What was particularly interesting about shooting this scene was that a small crowd gathered around us and wanted to know what we were filming. Not many of the trendy Brighton crowd had heard of Golden Charter before. When we told them we were filming an advert for funeral plans, the comment that stood out was something to the effect of - 'but this doesn't feel like it's about funerals'.

We were pleased to hear this, because we feel that it's a misconception that we should avoid talking about later life planning, and this is something we wanted to challenge in our advert. In reality, a funeral plan is about planning for the future and preparing your family for when you are no longer around.

Overall we are very pleased with this advert as we feel it strongly conveys what we at Golden Charter stand for - providing an affordable funeral plan and working with local, independent funeral directors to give you and your family peace of mind.

If you'd like to watch our advert, you can view it here.