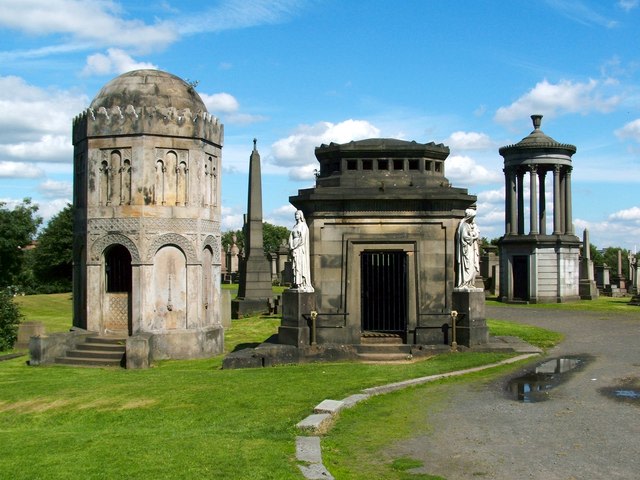 Most local graveyards are places of calm reflection, somewhere that families can spend time remembering loved ones that have passed. But some attract visitors from much farther afield, famous both for their well-known occupants and for their architecture.

Some are simply huge. The London Necropolis, in Surrey, is the largest cemetery in the United Kingdom and was once one of the largest in the world. Opened in 1854, it is home to almost a quarter of a million graves, and had its own railway connection to convey mourners - and their deceased relatives - the 23 miles from the capital city.

At the other end of the UK, Glasgow has its own 'City of the Dead'. Glasgow's Necropolis has just 50,000 people interred within its boundaries, but it is renowned for its Victorian Gothic architecture. Famous Scottish architect and artist Charles Rennie Mackintosh, although buried in London, is closely associated with the Glasgow cemetery having designed a Celtic cross to mark the grave of a senior police officer who was a close friend of the artist's father.

As urban populations grew in the 19th century, city centre cemeteries became overcrowded and the government passed legislation to move graveyard to the outskirts of the cities. This created opportunities for cemeteries to be designed as open spaces - Anfield cemetery in Liverpool, commissioned in the 1860s, is a stunning example. The diamond shaped site, covering almost 60 hectares, featured four separate entrance gates with their own lodges, three chapels, catacombs and an imposing clock tower, which is still in place.

Other British cemeteries have taken on the fame of the people buried there. Highgate Cemetery in North London is known throughout the world as the final resting place of Karl Marx, author of the 'Communist Manifesto' and one of the most influential political thinkers of the 19th century.

But the father of Communism is not the only famous author at Highgate. Douglas Adams of 'Hitchhikers Guide to the Galaxy' fame is buried there, as well as poets Christina Rossetti and Alfred Lord Tennyson. More recently Jeremy Beadle and Malcolm McLaren were buried at Highgate.

Cemeteries reflect the history around them. Graves throughout the village of Eyam, Derbyshire, date back to the 17th century plague outbreak that killed millions. Plague carrying fleas reached the Peak District in cloth being delivered to a tailor. When the disease took hold in the village, rather than spread the deadly plague, the villagers quarantined themselves, burying their dead by their own homes. In just over a year, 260 villagers died.

The abbey on Iona, in the Western Isles of Scotland, is one of the oldest religious centres in Europe. The cemetery at nearby St Oran's chapel  is said to be the burial site for almost 50 Scottish Kings and Saints, among them, King Duncan, murdered in the 12th Century by the notorious Shakespearean villain Macbeth.

Our cemeteries themselves have even made it into the pages of literature. The graveyard of the Church of Saint Mary in Whitby makes an appearance in Bram's Stoker's Dracula. Near the ruins of Whitby Abbey, St Mary's churchyard is described in the Victorian vampire novel and has since become a popular destination for Stoker fans.

Of the 14,000 graveyards in the UK, most are quiet and peaceful resting places for local people. But a few have become places of broad historic interest and well worth a visit.

Have you visited any of these cemeteries or are you aware of any other historic cemeteries in the UK? Let us know on our Facebook page.