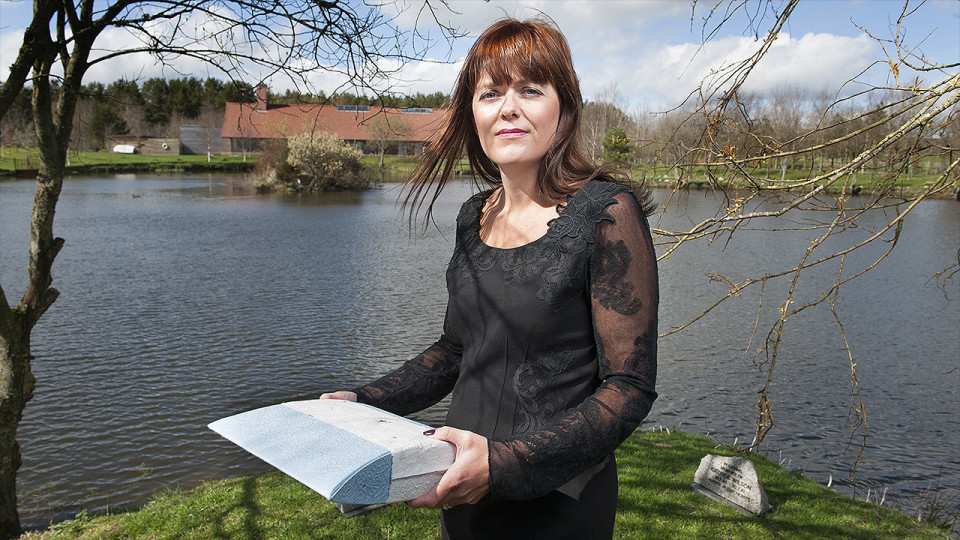 National Storytelling Week 2020 will run from Saturday 1 February to 8 February and, all across the country, people will be telling their stories in theatres, museums, schools, hospitals and care homes. To celebrate this special week of stories, we have interviewed four independent funeral directors from our UK-wide network and asked each of them to share some stories about their life as a funeral director, how they see the profession and some of their favourite things to help you get to know them better.

Ruth Jardine of Jardine Funeral Directors in Dumfriesshire became a funeral celebrant in 2012 and took over the role of Crematorium Manager at Roucan Loch Crematorium and Woodland Burial Site soon after. She became business manager of her husband's sixth generation family firm in 2018 and wants to make sure that the needs of the people they serve are always put ahead of making a profit. Her most memorable funeral was a burial that took place 700 feet above sea level, with the grave dug into solid bedrock.

Golden Charter: What made you consider entering the funeral director profession?

Ruth: In 2009, I met Mark Jardine. Mark is a funeral director and the MD of Jardine Funeral Directors, a sixth generation family firm established in 1862 in Dumfries. He is also a funeral celebrant, who helped pave the way for the advent of civil funerals in the UK and created the award-winning Roucan Loch Crematorium and Woodland Burial Site, which opened in 2005. It is Mark's work and vision that inspired me to enter the funeral profession.

We married and in 2012 I took a sabbatical from my role as a head teacher, and travelled to Cambridge to undertake the Diploma in Funeral Celebrancy with Civil Ceremonies Ltd. The following year I began conducting funerals.

Around the same time, critical illness meant that the superintendent at Roucan Loch was unable to fulfil his role and I was asked to oversee the position. I undertook a qualification with the Institute of Cemetery and Crematorium Management and was offered the position of crematorium manager at Roucan Loch, a versatile role which also includes the management of 70 acres of grounds and a woodland burial site - a haven for wildlife and biodiversity.

Currently, I combine this role with conducting funeral services and in 2018 I was appointed business manager of Jardine Funeral Directors to lead the company through an unpreceded period of change.

Ruth: At the age of 18, I undertook a music degree at King's College London and The Royal Academy of Music, studying flute and voice. Following this, I completed the Postgraduate Certificate in Education at Durham University before moving to Dumfries and Galloway to begin a career in teaching.

My career has involved primary teaching, working as a music specialist and instrumental instructor, Primary 7 to Secondary 1 transition teacher, and as a head teacher. I also undertook a secondment at RSPB Mersehead as a field teacher, teaching children about the wonders of nature.

Golden Charter: As it is National Storytelling week, complete this sentence "The one thing I would change in the funeral profession right now would be..."

Ruth: To make the deceased and their family the priority rather than profitability. Unfortunately, there are still firms that are driven by profit and satisfying shareholders, which is completely wrong in my opinion.

Golden Charter: Can you tell us the story of the most unique funeral you have ever conducted?

Ruth: The one that springs to mind is a service 700 feet above sea level, at the top of a hill. It was a burial and my husband Mark borrowed a pneumatic drill to dig the grave into solid bedrock. It took two days to prepare the burial site in time for the service and the blade and pointer had to be changed regularly.  I don't think a burial has been conducted like this since the Iron Age! It was on the client's land at their request, with a superb view over Dumfries and across the Solway to the Lake District.

It was very satisfying to fulfil this service and, as it was Easter weekend, the council couldn't provide any assistance, so all aspects had to be undertaken by Jardine Funeral Directors. On the day of the service, which was attended by around 1,000 mourners, the coffin left the church and travelled by trailer to the top of the hill, which was around two miles away and a very special natural resting place. The experience was very different and one that I will forever remember.

Golden Charter: What do you enjoy most about your job?

Ruth: My passion for the arts and literature is invaluable in helping to select the right readings, poignant poetry and reflective music, to create a ceremony that is unique and exactly as families wish it to be. As an accomplished flautist I am often asked to play at services.

Working as a celebrant, you only get one chance to create the best possible service for the family and it must always be perfect. It is a very difficult task and is always satisfying when the family tell you that you got the person just right - it was as if you'd known them personally. This is such a rewarding feeling and a complete privilege.

Golden Charter: Is there a particular moment that stands out for you during your time in the profession?

Ruth: As a newly trained celebrant, I can remember the first funeral I conducted with great clarity.

This was a 'real' situation, not a textbook scenario that we had covered in our training, and I recall my nervousness but also my desire to get everything right - as if my life depended on it. The enormity of the situation was crushing, especially when my sat nav couldn't locate the widow's cottage, which was quite literally in the middle of nowhere!

But I remember how I connected with the widow, as although the place where her husband had been born and raised was hundreds of miles away, I knew it well and I recall how easily the conversation flowed.

The ceremony reflected the very essence of the gentleman and captured his life in a respectful and highly personal manner and the family were delighted.

To be allowed an insight into the lives of others is a true privilege. As a celebrant, every situation is different and no day is ever the same but there is one thing that remains constant - painting a picture of the deceased that everybody recognises.

When you think about it, the celebrant is possibly the only person at the service that has never met the deceased, so to talk about them for 30 minutes can be a difficult and daunting task. It is therefore extremely important that you take time to prepare well, ask the right questions and listen carefully in order to craft a service that is fitting, to honour that unique and special individual. This can take many hours but it is incredibly rewarding work, especially when you are told by mourners, "you got them just right".

Golden Charter: If you could invite three guests to a dinner party who would you pick?

Ruth: Boris Johnson, Donald Trump and Nicola Sturgeon. What an interesting evening that would be!

Ruth: Growing up, it was 'Danny, the Champion of the World' by Roald Dahl.

Danny was only four months old when his mother died. The novel recounts the relationship between Danny and his father, who live in a gypsy caravan behind a service station and garage, fixing cars for a living. At the age of nine, Danny learns his father's secret - he is an avid poacher, as was his grandfather.

When I was teaching, I used the book with several classes and never tired of the close bond between Danny and his father, their love of the outdoors and the adventures they get into as they seek to poach pheasants from the unkind Mr Hazell.

Golden Charter: Finally, if you had one final meal, what would you have?

Ruth: It would have to be something Italian. Pici pasta with an Italian Tuscan sauce, accompanied by a large glass of Vernaccia di San Gimignano wine. Perfect!

Jardine's is just one of the almost 3,000 independent funeral directors that make up Golden Charter's UK-wide network. Find out more about how you can plan for your funeral with one of the funeral directors in our network. Request a free, no obligation information pack below or call 0808 169 4534.