How to choose flowers for a funeral 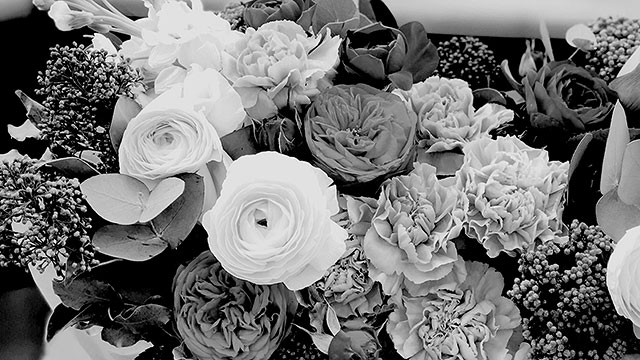 When you're arranging the funeral of a loved one, or even planning your own funeral, flowers may not be top of your list. But a carefully chosen floral tribute can add character and colour to an otherwise sombre occasion.

Flowers have been used at funerals since time immemorial, playing an important role in funeral rites since prehistoric times, with archaeological evidence showing that Neolithic burials featured floral tributes. Medieval households relied on the scent of fresh flowers to freshen the air around bodies kept in the home before burial and the Victorians relied on a complicated floral language to express their deepest emotions.

Funeral-flower choices like many aspects of modern funerals, are led by personal taste. Seasonal availability may limit the flowers that are available, but there are always options to reflect your passions and personality or those of your loved one. From coffin sprays in the colours of a favourite team to displays in the shape of animals, musical instruments or letter tributes spelling out names.

Unless you are familiar with flowers, getting expert advice makes sense.

If you are arranging a funeral, your funeral director can advise on local florists that they work with to prepare funeral tributes. They will also be able to advise if your local crematorium has any restrictions on the display of flowers during the service.

Talking directly to a local florist will also give you an idea of the types of floral tributes available and a good idea of likely costs.

If you are attending a funeral and wish to send flowers it is important to check first that the family is accepting them. Although it used to be very common for mourners to send flowers as a tribute to the deceased, the practise is becoming less common - many families now ask for charitable donations instead.

If the family is accepting flowers at the funeral, it is usual to send them directly to the funeral director so that they can arrange for transportation to the service.

Almost any cut flowers are suitable for a funeral wreath or spray. Seasonal availability will influence availability and some flowers will be more expensive than others, especially at certain times of the year. Your florist will be able to provide advice on availability, price and suitability.

Whether you want your funeral flowers to be vibrant and colourful or calm and serene, traditional, contemporary or quirky, there are several flowers commonly included in funeral tributes.

Known for their elegant beauty, both the Greeks and Romans revered the lily and it is referenced in the Bible and by Shakespeare. There are many types, but white lilies are most often seen in funeral arrangements, traditionally symbolising innocence and a return to peace.

Acknowledged everywhere as a symbol of affection, there is a huge variety of colours available in roses. White blooms suggest innocence, red love, pink grace and deep crimson roses denote grief and sorrow. A single rose placed within a funeral arrangement is said to show enduring love.

Carnations are very practical choice for floral funeral arrangements as they tend to last a long time are strongly scented and generally affordable. Although available in many colours, white, pink and red are most common at funerals, symbolising innocence, love and remembrance respectively.

Gladioli are often used to bring height to classic funeral arrangements. Named after the Latin 'Gladius' or sword, their historic association with gladiators has led gladioli to be used, traditionally, as funeral flowers for men. They are used to represent strength of character and integrity.

Spring tulips and daffodils suggest new beginnings, bringing hope for the future to grieving families. The bright yellow of daffodils brings a splash of colour to solemn funeral services, hinting at a return to cheerfulness. Tulips in white are used to symbolise forgiveness, and red, enduring love.

Flowers after the funeral

It is worth thinking about what you want to do with funeral flowers after the service. If possible, take at least some home as a reminder of the support shown by family and friends.

Others can be donated to a local old people's home or hospice. It is best to call ahead, but staff are usually very grateful to receive flowers. They will disassemble large wreaths and sprays to reuse the in smaller, individual vases that can be used to brighten up resident's or patient's rooms.

Arranging flowers is just one thing on a long list of practical arrangements to be taken care of before a funeral. Fortunately, your funeral director can help and Golden Charter has one of the largest network of independent funeral directors in the UK.

Many are long-standing, family-run businesses and all provide a compassionate and professional service. Find out more about how you can plan for your funeral with one of the funeral directors in our network. Request a free, no obligation information pack below or call 0808 169 4534.