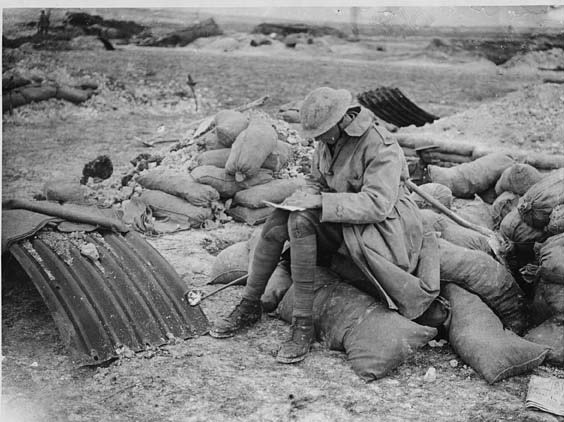 Blog image for Words of Remembrance

One of the best-known symbols of remembrance is the poppy, a resilient flower that, despite the surrounding destruction, flourished in the battle fields of the First World War. Its use to commemorate those who have died in war was inspired by the poem 'In Flanders Field', written in Spring 1915 by Canadian army doctor, Lieutenant Colonel John McCrae.

The Royal British Legion video below explains how the words of the now-famous poem led an American woman called Moina Belle Michael to make and sell red silk poppies in November 1918. Commemorative poppies came to Britain via a French woman called Anna Guérin and, in 1921, the newly formed Royal British Legion ordered and sold 9 million poppies in the first ever Poppy Appeal.

Nobel-prize winning physicist, Richard Feynman, wrote a letter to his wife Arline 16 months after she died, simply to tell her he loved her and he missed her. He closes with, "Please excuse me for not mailing this -- but I don't know your new address".

Clearly he is writing for himself. Writing therapy or journaling is a recognised tool for helping people heal from emotional, stressful and traumatic events, the process of writing our feelings somehow easing raw emotions. Feynman's letter was only discovered after his death, more than 40 years after he wrote it as a way to express his feelings privately, and try to deal with the sense of loss that he felt.

Other people have written accounts of their loved one's death to help them and their family understand and remember their passing. Most notably, the wife of 'Brave New World' author Aldous Huxley wrote a long and moving account of her husband's death to his brother.

In the letter, she writes about the final week of Huxley's life, especially his final day. She describes how he came to terms with the fact that he was dying and explains to his brother that it was important to record his passing, not just for those close to him, but as a conclusion to his work for 'people in general'.

Letters are also written to friends and family before they have passed, to offer comfort and to say goodbye. When songwriter and poet Leonard Cohen was told that the woman who inspired one of his most famous songs was dying, he immediately wrote to her.

His letter to Marianne Ihlen, the inspiration for the songs 'So Long Marianne' and 'Bird on a Wire', was read to her by friends just two days before she died. In it, he wished her a good journey and wrote, 'Goodbye old friend. Endless love, see you down the road'.

This year, Remembrance Sunday is on Sunday 13th November and Golden Charter is proud to support The Royal British Legion and Poppyscotland, who provide lifelong support for the Armed Forces community.